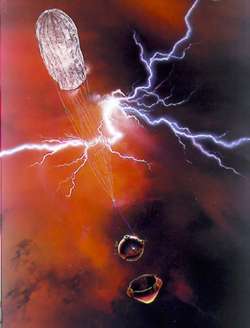 Most people are unaware that we have no understanding of how lightning is created in clouds. The simplest answer is that lightning is not generated there at all. Clouds merely form a convenient path to Earth for electricity originating in space. Without clouds it is possible to have a “bolt from the blue”. That is happening on Venus (although the sky certainly isn’t blue). Weather systems are driven primarily by external electrical influences.

Consequently the Sun has weather patterns. And the most distant planet, Neptune, has the most violent winds in the solar system though it receives very little energy from the Sun. Electric discharges from space cause Mars’ huge dust devils and planet-wide dust storms. They are responsible for Jupiter’s Great Red Spot and the “spokes” in Saturn’s rings. It is why Venus has lightning in its smog-like clouds and its mountain-tops glow with St. Elmo’s fire. It is why the Earth has lightning stretching into space in the form of “red sprites” and “blue jets”, and why tethered satellites “blow a fuse”.

However, nobody is trained to consider electrical energy input to weather systems.

The image above is a NASA artist’s view of lightning on Venus during the descent of one of the Pioneer probes. Venus has smog-like clouds that are not expected to generate lightning and yet the planet suffers intense lightning. This argues against the popular notion of what causes lightning.