For more than 10 years plasma physicists have had an electrical model of galaxies. It works with real-world physics. The model is able to successfully account for the observed shapes and dynamics of galaxies without recourse to invisible dark matter and central black holes. It explains simply the powerful electric jets seen issuing along the spin axis from the cores of active galaxies. Recent results from mapping the magnetic field of a spiral galaxy confirm the electric model.

On the other hand, cosmologists cannot explain why spiral shapes are so common and they have only ad-hoc explanations for galactic magnetic fields. More recently, inter-galactic magnetic fields have been discovered which is the final straw to break the camel’s back. Incredible gravitational models involving invisible “black holes” have had to be invented in a desperate attempt to explain how the attractive force of gravity can result in matter being ejected in a narrow jet at relativistic speeds. 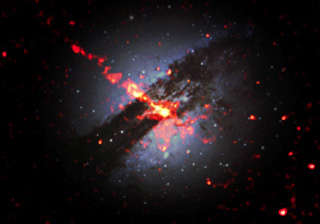 Why do we accept such science fiction as fact when an ELECTRIC UNIVERSE® predicts spiral shapes, magnetic fields and jets? The cosmic magnetic fields simply delineate the electric currents that create, move and light the galaxies.