Electric discharges between closely approaching bodies takes the form of “thunderbolts of the gods”, or distinctively shaped helical plasmoids. Such plasmoids were sculpted by many ancient cultures when depicting Jupiter hurling his thunderbolt.

Jupiter’s thunderbolt raises questions about the history of mankind and the Earth that have never before been asked. When it comes to dating planetary surfaces, plasmoids cause characteristic electrical arc scarring in the form of sinuous channels and neatly circular craters with steep walls and occasional central peaks. Such craters are universally misinterpreted as impact craters. The sinuous channels are wrongly classified as riverbeds or lava channels. Minutes or hours of electrical scarring can produce a surface like that of the Moon, which is later interpreted in ad hoc fashion to be billions of years old. Hemispheric differences in cratering are expected in this model. And for the sceptics, subdued electric arc machining of a planet-sized body continues to this day on Jupiter’s innermost moon, Io. See the news items on this website for many successful predictions about the discoveries that would be made as close-up images of Io became available. 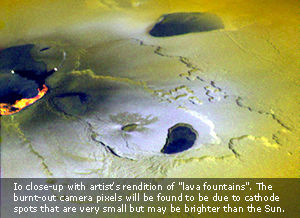 Planetary geologists are not trained to recognize electric arc scarring otherwise they would have seen at a glance the characteristic cathodic surface erosion and cathode jets on Io. They are definitely not volcanos as we know them from geology textbooks.