The ELECTRIC UNIVERSE® model is a coherent “Big Picture” of our situation in the universe, spanning many disciplines. It highlights repeated electrical patterns at all scales that enable laboratory experiments to explain the strange, energetic events seen, for example, in deep space, on the Sun, and on Jupiter’s moon, Io. The ELECTRIC UNIVERSE® works backward in time using observations rather than forward from some idealised theoretical beginning. It provides simple answers to problems that are now clothed in fashionable metaphysics and mysticism. It is more interdisciplinary and inclusive of information than any prior cosmology. It points to practical possibilities far beyond the limits set by current science.

The ELECTRIC UNIVERSE® model grew out of a broad interdisciplinary approach to science. It is not a technique taught in universities. The ELECTRIC UNIVERSE® is based more on observations and experiment than abstract theory. It recognizes connections between diverse disciplines. It concludes that the crucial requirement for understanding the universe is to take fully into account the basic electrical nature of atoms and their interactions. Strangely, this is not the case in conventional cosmology where weaker magnetism and the infinitely weaker force of gravity rule the cosmos. Such a simplification may suit a theoretical physics based on electrical neutrality of matter in Earthly laboratories but it does not apply in space where plasma dominates. 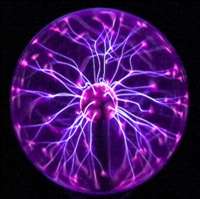 Plasma has been called the “fourth state” of matter, after solids, liquids and gases. Most of the matter in the universe is in the form of plasma. A plasma is formed if some of the negatively charged electrons are separated from their host atoms in a gas, leaving the atoms with a positive charge. The negatively charged electrons, and the positively charged atoms (known as positive ions) are then free to move separately under the influence of an applied voltage or magnetic field. Their net movement constitutes an electrical current. So, one of the more important properties of a plasma is that it can conduct electrical current. It does so by forming current filaments that follow magnetic field lines. Filamentary patterns are ubiquitous in the cosmos.