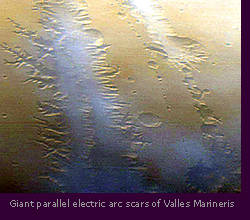 So NEAR, and yet so far from UNDERSTANDING

On Valentine’s Day, 2000, the Near Earth Asteroid Rendezvous (NEAR) spacecraft is is due, on its second attempt, to go into orbit around asteroid 433 Eros. It will be the first spacecraft to orbit an asteroid. NEAR will examine the odd-shaped rock, about twice the size of Manhattan Island, for about a year.

What do we expect to learn from this adventure? Astronomers agree that it is a chance to examine material left over from the formation of the solar system. Maybe they are pieces of a failed planet? In any case, the usual mantra is invoked: it will help us understand the origin of the solar system. Yet images returned from close fly-bys of asteroids together with Hubble Space Telescope images of the large asteroid, Vesta, have already provided more puzzles than answers. That situation will continue while we remain so far from understanding what we are looking at. The accepted model for the origin of the solar system is a modern “fairy story”, in the words of one noted astronomer, requiring ad hoc miracles to occur on every page in order to arrive at a happy ending.

The biggest puzzle concerns the amazingly large craters on most of the asteroids. They create severe problems for the impact theory of accretion but astronomers have no alternative mechanism to offer. In an article in Science of 19 December 1997, titled “New View of Asteroids”, Erik Asphaug writes:

“Last June, NEAR flew by the main belt asteroid 233 Mathilde … Although the resolution was 50 times as coarse as expected at Eros, the images of Mathilde reveal some surprises and provoke an overdue reevaluation of asteroid geophysics. Mathilde has survived blow after blow with almost farcical impunity, accommodating five great craters with diameters from 3/4 to 5/4 the asteroids mean radius, and none leaving any hint of global devastation. Given that one of these great craters was last to form, preexisting craters ought to bear major scars of seismic degradation, which they do not. Furthermore, asteroids Gaspra and Ida (encountered by Galileo en-route to Jupiter) and the small satellite Phobos all exhibit fracture grooves related to impact, yet fracture grooves are absent on the larger, more battered Mathilde. …..

Consider the third largest asteroid, 4 Vesta, a basalt-covered volcanic body 530 km in diameter that resembles the Moon as much as it does Mathilde or Toutatis. Recent views (36 km per pixel) by the Hubble Space Telescope show a 460 km crater, with raised rim and central peak, covering the entire southern hemisphere – an impact scar surpassing (in relative diameter, but not relative depth) the great chasms of Mathilde.

Such craters greatly challenge our understanding of impact processes on asteroids, and on planets in general; evidently, our science must adapt. The study of asteroids is therefore particularly exciting, as small planets provide the fulcrum for the growth of planetology, and for an evolution of geophysics in general. Complex and poorly understood solar system processes – such as impact cratering, accretion and catastrophic disruption, the evolution of volcanic structures, and the triggering of differentiation – may reveal themselves only in a study across the gamut of planets, from the least significant house-sized rock to the most stately terrestrial world. Like clockwork miniatures, asteroids demonstrate primary principles governing planetary evolution at an accessible scale, and thousands await discovery and exploration in near-Earth space alone.”

In the ELECTRIC UNIVERSE® model, moons, asteroids, comets and meteors are created in electrical discharges between planetary bodies. They are ripped from a planet’s surface by electrical forces that easily overwhelm the weak gravitational force. The most well-known, albeit unrecognized, arc scar from a recent planetary encounter is seen on Mars in the form of the colossal Valles Marineris canyons.

Two million cubic kilometers of rock was excavated by the arc and hurled into space. Some fell back to form the strewn fields of boulders seen by every Mars lander. Some remained in orbit to become the two moons of Mars, Phobos and Deimos. 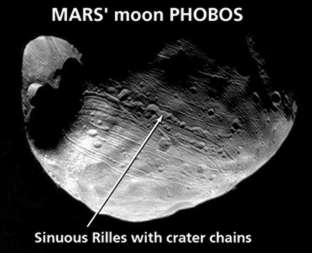 (It is just possible that there is more rubble in orbit about Mars that has been the cause of inexplicable failures of spacecraft on arrival there). The rest formed meteors and a belt of asteroids. This model simply explains why many meteorites contain minerals whose crystals show that they must have formed inside a planet. It explains the origin of the Martian meteorites that are still arriving on Earth. And the electric arc mechanism explains simply the strange flash-heating of chondrules and other minerals found in meteorites. So, if EROS’ parent was Mars it may show similarities to Martian rocks.

The most compelling evidence of their electrical birth is that all asteroids imaged to date bear scars in the diagnostic form of circular electric arc cratering. One large crater on asteroid Vesta has an untouched central peak. Impacts do not form circular craters with sharp rims – they “splatter”. They don’t form central peaks. Small secondary craters appear preferentially on the raised rims of earlier craters while the reverse is never seen – which also rules out an impact origin.

Crater-filled grooves, seen clearly on Phobos have nothing to do with impact fracturing and are merely small sinuous rilles created by surface lightning streaking toward the main arc. 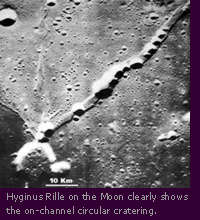 Sinuous rilles are not collapsed lava tubes. Since electrical cratering is a slower process than sudden impacts and does not involve mechanical shock to the same extent, there is little disturbance of pre-existing craters – as seen dramatically on Mathilde.

It is worth noting the odd low apparent density of many asteroids. In such cases, astronomers introduce another ad-hoc assumption that the asteroid is porous, containing up to 60% free space. But that raises the question of how, in their model, such an object could sustain any sizeable impact without shattering. In contrast, the Electric

Universe model expects that a low level of charge on the surface of an object will lower its measured gravitational influence. For example, comets display non-Newtonian behaviour simply because they are visibly discharging and changing their state of electric charge. So a low density may be due to the electrical state of an asteroid rather than any porosity. In that case, the surface minerals will have a higher density, as measured on Earth, than the gravity of the asteroid would lead us to believe. Certainly, the asteroids do not give the appearance of being a “rubble pile”. If asteroids maintained their integrity under the intense electrical forces that removed them from a planet they must have considerable mechanical strength.

Having been “born” in a cataclysm created by a powerful electric discharge there may be strong remanent magnetism in any susceptible minerals on an asteroid. Strong magnetic remanence has been inferred on the asteroid Gaspra, equaling the Earth’s field strength, and it is a distinguishing feature of most meteorites. The process of electrical cratering will generate regions of anomalously strong patterns of magnetism. In addition, nuclear processes are to be expected. So nucleosynthesis, transmutation of elements and the formation of isotopes and radionuclides will have had an effect on the surface of asteroids similar to that seen in meteorites where odd isotopes occur from short-lived heavy parent radio-nuclides and others do not match those found in the solar wind.

In order to advance we require much more than that “our science must adapt” or that understanding of these processes will come about from “an evolution of geophysics”. It will require nothing less than a revolution in science before understanding is possible. That revolution begins with discarding the fairy tales about the formation of the solar system and returning to the laboratory to study the effects of electric discharges on model planetary surfaces. However that might be difficult for those who believe unshakably in their childhood stories and for many of the modern “virtual reality” computer generation.