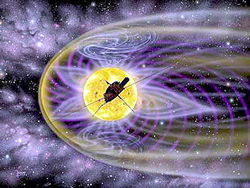 Scientists fail to unravel the kinks in solar waves

Kinks in the Sun’s magnetic field have puzzled scientists since they first started studying the solar wind, and now researchers at NASA’s Jet Propulsion Laboratory, Pasadena, Calif., have found the reason: they are caused by the evolution of a type of magnetic wave called Alfven waves.

Scientists measured sudden changes in the Sun’s magnetic field with the magnetometer instrument on the Ulysses spacecraft, which is orbiting the Sun’s poles at a distance between Jupiter and Mars. Ulysses has been studying the Sun since 1990 and has just finished studying the south pole of the Sun at solar maximum, a time of great activity.

“Over the poles of the Sun, we saw abrupt decreases in the magnetic field,” said JPL’s Dr. Bruce Tsurutani, a co-investigator on the magnetometer instrument on Ulysses. “We did not know what they were, because we had never seen anything like it before. Now we know that the disturbance is caused by Alfven waves.”

Scientists expected to find that either the field magnitude remained the same, though the angle changed, or that the magnitude changed, with no fields threading across the structure, said Tsurutani. Instead, they found that the ends of Alfven waves always have both rotational and tangential characteristics.

Like the movements of a plucked guitar string, Alfven waves travel down the magnetic fields that emanate from the Sun. Disturbances in the Sun’s magnetic field, which is embedded in the solar wind, travel through space to eventually cause auroras on Earth. The high-energy particles from the solar wind become trapped in the Earth’s magnetic field and come down into the atmosphere near the Earth’s north and south magnetic poles. The highly-charged particles then collide with oxygen and nitrogen in Earth’s atmosphere and emit light, forming the aurora.

Tsurutani also studied polar plumes, long trails from the base of the Sun. The plumes form in the Sun’s polar regions, the upper and lower 30-degree latitude regions, and where these plumes occur, the magnetic field isn’t kinked, but instead forms long, thin, straight tubes. This means that the Alfven waves don’t operate in these regions, though scientists don’t yet know why.

“Ulysses was able to find that the Sun’s polar plumes stretch out past the orbit of Mars and maybe farther,” said Tsurutani. “What’s fascinating is how these plumes can be so thin and so long at the same time.” A plume could be 100 times wider than it is long (sic). The European Space Agency’s Solar and Heliospheric Observatory (SOHO) noted these polar plumes in 1996.

What is fascinating is that astrophysicists cannot “see” what they are looking at because of the dogma that electric currents cannot flow in space and the Sun cannot be electrically charged. The thin, straight tubes are diagnostic of Birkeland currents. Birkeland currents also have an outer twisted filament or rope-like form taken by electric current flowing in plasma. The Alfven waves are therefore more likely to be the structure of the magnetic field associated with Birkeland currents. Otherwise there is some unspecified activity required beneath the Sun’s surface to excite the Alfven waves, or “pluck the guitar string” as it is colorfully described. Unfortunately this “explanation” follows a well-established tradition of ascribing every weird feature of the Sun to poorly defined activity hidden from view inside the Sun. It is what is known as “pathological science” – a term coined by a pioneer of plasma physics and Nobel Laureate, Irving Langmuir.

The report goes on…

Alfven waves are named for Hannes Alfven, a Swede who in 1942 discovered the waves, for which he was later awarded the Nobel Prize.

Alfven must be spinning in his grave to see the continued misuse of his work by astrophysicists. In 1970 he used the occasion of his Nobel Prize acceptance speech in unprecedented fashion to admonish them for treating plasma in a way he had subsequently shown to be mistaken. He said, “The cosmical plasma physics …is to some extent the playground of theoreticians who have never seen a plasma in a laboratory. Many of them still believe in formulas we know from laboratory experiments to be wrong. The astrophysical …crisis has not yet come.” We are still waiting…

Ulysses, launched in 1990, is a joint venture of NASA and the European Space Agency. JPL manages Ulysses for NASA’s Office of Space Science, Washington, D.C. JPL is managed by the California Institute of Technology in Pasadena for NASA.