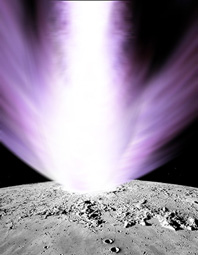 “Twinkle, twinkle little star. How I wonder what you are.”

In a report for the New Scientist of 26 July, titled ‘The Sun Catcher,’ Hazel Muir writes about the daring exploits required to retrieve samples of the Sun to be returned to the Earth in 2004 by the GENESIS spacecraft. Astronomers hope that the solar samples collected on five separate 1-metre round collector arrays will shed light on the birth of the Sun and planets. I hope they are successful but I predict that it will add to the utter confusion resulting from earlier samples from the Moon, Mars and meteorites.

By April 2004, the arrays will have trapped only about 20 micrograms of solar material other than hydrogen and helium – the weight of a few grains of salt. That tiny amount could still be enough to revolutionise our view of the sun. To date, our best estimates of the make-up of the sun come from detailed studies of the light it emits and from spacecraft that have analysed the solar wind. In terms of mass, hydrogen and helium make up about 98 per cent of the sun, with other elements making up the rest.

Previous studies of the solar spectrum have identified the fingerprints of over 60 elements. But measuring their abundances isn’t so easy and most elements come with an error of at least 10 per cent. For some, astronomers confess they can’t measure the amounts at all. Even worse, the solar spectrum says nothing about the various different isotopes of a particular element in the sun. That’s because the light an atom emits or absorbs depends on the energy levels of its electrons – not on the number of neutrons in its nucleus, which is what varies according to the isotope. Spacecraft measurements of isotope ratios often have uncertainties of 40 per cent or more.

With the Genesis sample safely back in the lab, astronomers will be able to analyse it with the most sophisticated equipment to hand. This will improve their measurements of solar elements by a factor of 3, and will also allow them to pin down isotope ratios with errors of just 0.1 per cent, making them tens or hundreds of times more accurate than before.

Having such a precise list of raw ingredients for the solar system might help astronomers understand all the inexplicable differences between elements on Earth, the moon and Mars. For decades researchers believed that the isotope ratios of different elements – such as the ratio of carbon-14 to carbon-12 – are the same everywhere, from the sun to the outer planets. But following the Apollo missions, it became clear that things are not that simple.

Between 1969 and 1972, astronauts on Apollo missions to the moon planted aluminium sheets on sticks into the powdery lunar surface to trap solar-wind particles. Back on Earth, scientists extracted helium, neon and argon from the metal, and found that the ratio of neon-20 to neon-22 was inexplicably 38 per cent higher than in the Earth’s atmosphere.

Even on the moon’s surface, the ratios of different nitrogen isotopes in a rock vary depending on its age. One possible explanation is that the nitrogen content of the solar wind has gradually changed over time, although how the sun could arrange that is a mystery.

The most dramatic variations in isotope mixes are for oxygen. The ratio of oxygen-18 to oxygen-16 is completely different in moon rocks and terrestrial rock, and in meteorites from Mars and the asteroid belt. “As time has gone by, we have found more and more differences, as measurements get more precise,” says Burnett. “There are now a whole string of elements whose isotopes are known to vary in the moon, meteorites and in the Earth, and no one really knows why these variations exist.”

The Genesis sample could help resolve some of these puzzles by filling in gaps in our picture of the sun’s chemical make-up, and how that differs from the make-up of the Earth, Mars and the asteroids. There could be underlying patterns in this “map” that reveal why all these bodies came to be so different. That’s assuming nothing goes badly wrong on the sample’s return to Earth.

“These puzzles” are manifold because astronomers’ assumptions fly in the face of the data. The very name of the mission, “GENESIS,” betrays the assumption that the outer layers of the Sun reflect the exact composition of the giant interstellar cloud that is presumed to have originated the solar system. This assumption, in turn, is based on the belief that the only element that changes over time in our Sun is the hydrogen it “burns” in its core to form helium. Practically all heavier elements must remain in the same abundances and isotopic ratios as “in the beginning” of the star.

I claim that both assumptions are wrong. At best the GENESIS results will only add more isotopic variations to those already discovered. In the worst case, astronomers will be confounded by the discovery of one or more short-lived radioisotopes in the solar wind samples. That cannot happen if the Sun works the way astronomers believe it does. However, isotopic variation is expected if the Sun is a cosmic electric discharge phenomenon.

In an electric star, both isotope ratios and heavy-element abundances would not be fixed at the time of its birth but would be “cooked up” in the outer layers by the high-energy discharges. It’s ironic that physicists use an electrically driven plasma pinch in laboratory experiments to mimic the nucleosynthesis they believe occurs at the core of the Sun. The question seems never to be asked: if they find it easiest to drive nucleosynthesis using electrical power, why would Nature do it in a more difficult way? This very same plasma pinch, scaled up from the lab by many orders of magnitude, can produce the 60 elements found in the atmosphere of the Sun.

The formation of planets by electrical expulsion of part of the parent’s core material also leads to nucleosynthesis in the grandiose lightning flash of a nova. That is why some of the expulsion debris, in the form of meteorites, contains the products of very short-lived radioisotopes in their flash-heated minerals. This is a far simpler explanation than to require rare supernova events nearby at just the right moment during the formation of the solar system.

The episodic expulsion of planets results in a period of readjustment within the solar system after each event. The powerful electric force mediates that process when the comet-shaped plasma sheaths of the planets interact during close approaches. The sheaths (misnamed magnetospheres) tangle and the planets abruptly “see” each other electrically. When this first happens, gargantuan electrical discharges snake between the bodies and scar their surfaces with circular craters, mounds, sinuous channels and etched terrains. These cosmic thunderbolts too are capable of inducing nucleosynthesis and radioactivity.

Apollo astronauts found radioactive hotspots on the Moon, associated with young craters. These are the signatures of cosmic thunderbolts. Atmospheric and surface materials are dumped from one body to the other, and their elemental abundances are altered in the process. Most importantly these electrical interactions limit solid body collisions and mediate capture. The Moon was not formed by a collision with Earth but was captured recently.

It should have been obvious following the Voyager missions that the solar system shows myriad signs of a chaotic history. The old fairy tale that the solar system was formed “once upon a time, long, long ago” should have been retired immediately. The chapter of imaginary early impacts is not required to explain the heavy and oddly distributed craters on Mercury, the Moon, Mars and other bodies. It is amazing the amount of evidence against these fictions. Yet space age contradictions have not been able to dispel what has become a core belief in science. The story of the condensation of the solar system is a hangover from an earlier era, the time when science was superseding religion in chronicling mankind’s place in the scheme of things. It seems the human craving for certainty in the face of a violent universe took precedence. Unfortunately all we got is a new religion of science.

So, what good can come from the GENESIS mission?

The greatest wake-up call would be the discovery of short-lived radioisotopes in the solar samples. That would show we don’t know how stars shine. The knock-on effects would be prodigious. The entire elaborate fiction of stellar evolution would come crashing down. Our certainty about the ages of stars and galaxies would be removed. The anomalies in stellar metallicities would be revealed as pointing to the need for a complete rethink of how stars and galaxies are formed and evolve. Eventually it would require acknowledgement that we inhabit an ELECTRIC UNIVERSE®.

Within the solar system, knowing the isotopic composition of the solar wind might help us to identify atmospheric gases that have come from the solar wind and those that have been transferred from one body to another in past electrical interactions. We may be surprised to find that Mars has a whiff of Venus’ atmosphere, the Earth and Moon have traces of Martian noble gases, and that the new, hot planet – Venus – has an atmosphere that is changing composition as we watch, mediated by continuing surface electrical activity.