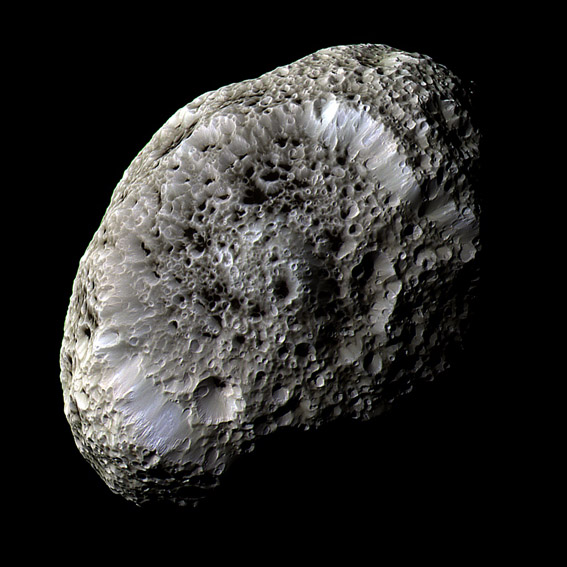 On September 26th, Cassini successfully performed its closest flybys of Saturn’s moons Tethys and Hyperion. Hyperion (seen below in false color) is a strange, spongy-looking body with dark-floored craters that speckle its surface.

The image of Hyperion evoked the same surprised reaction felt when electron microscopes began to reveal in detail the delicate structures of biological specimens. And there lies a clue. In an ELECTRIC UNIVERSE®, where plasma effects can be scaled over more than 14 orders of magnitude, we may look to plasma-etched surfaces, viewed under an electron microscope, to provide an insight into Hyperion’s scars. If those scars are electrical, the history of Hyperion is different from anything we have been led to believe.

The standard mantra of the formation of the solar system, some 4 billion years ago, requires that planets and moons form by impact and accretion of leftover material from the Sun. It is a theory that suffers many difficulties and has proven useless at predicting what would be found as space probes examined each planet closely. The principal evidence for the theory, the obvious cratering of solid planets and moons, is subject to interpretation. It has never been observed happening. Or – it should be said – cratering has been observed in action but was unrecognized because it didn’t require an impact event. Our prior beliefs determine what we see. The early arguments over the causes of cratering have been forgotten and many anomalous features of craters ignored in order to sustain the belief that planetary cratering is caused by impacts.

If we admit the electrical nature of the universe the picture becomes much clearer. We may confidently reconstruct Hyperion’s history. But first we must adopt a new story for the Sun based on the emerging discipline of plasma cosmology.

Stars are formed efficiently in a cosmic plasma discharge known as a Z-pinch. A Z-pinch electromagnetically scavenges diffuse matter over a large volume of space with a force that diminishes directly with distance, not the much weaker square of the distance due to gravity. The Z-pinch forms a string of separate plasmoids, which become stars. It is the Z-pinch effect that generates the intense winds seen coming from star forming regions. As the discharge weakens and becomes unstable the stars are scattered like buckshot from their linear arrangement. The initial linear configuration could explain why some nearby stars tend to have similar axial alignments to that of the Sun.

Beyond plasma cosmology we enter the realm of electrical stars and electrical cosmogony. The history goes as follows: after their formation in a Z-pinch, stars continue to receive electrical energy from the galaxy. The gravitational field inside a star distorts atoms in the star to form tiny electric dipoles. These atomic dipoles align to produce a weak radial electric field. Under the influence of that field, electrons tend to drift toward the surface, leaving a positively charged interior. It is the mutual repulsion of the positive charge within a star that supports the bulk of its envelope against gravity. A central fire is not necessary. However, a star’s apparent size is purely an electric discharge phenomenon, dependent on its environment, and bears little relationship to its physical size. The best example is a red giant star, which has a low energy glow discharge so far from the central star that it can envelop an entire planetary system.

External electrical or gravitational stresses on a star may cause some of its internal positive charge to be offset from the center of the star. And since like charges repel, the offset charge will tend to accelerate toward the surface. It is a form of internal lightning. This process may lead to the expulsion of a substantial portion of the positively charged interior of the star. The visible result is a nova, or star-wide lightning flash, as electrons in the stellar atmosphere rush toward the emerging positively charged matter. The ejected material constitutes a powerful electric current, which generates its own magnetic field. That magnetic field constricts the charged matter to form a jet. The leading matter is neutralized and stops accelerating, causing the following charged matter to pile into it. So is born a companion star or gas giant planet. This explains why so many stars have been found to have extremely close-orbiting gas giant planets.

Planets do not grow by hypothetical impact accretion of widely dispersed “leftovers.” Rocky planets and moons are formed episodically from gas giant planets by the same electrical expulsion process. It is this planet birth model, with its biological overtones of parents and offspring, that accounts for some of the diversity of objects in the solar system. It helps us understand why the gas giants have so many satellites, some large enough to be classed as planets in their own right. It helps us understand the presence of Saturn’s ephemeral rings, which cannot have lasted for 4 billion years. Saturn’s rings are the remains of an expulsion disk accompanying the birth of the latest child in the solar system. The rings of the other gas giants are similar “afterbirth” material. The rings remain rings as they gradually decay. They do not form moons. Similarly, a ring of dust around the Sun will not form a planet.

Where does this leave the craters? Craters are a signature of cosmic electric discharge. Cratering occurs in a sudden flurry during the birth process and later through brief close encounters with other bodies, in the process of achieving a stable orbit. These short episodes account for the common hemispheric differences in cratering patterns. Just like the impact model, lightning has an explosive effect on a planetary surface. However, the energy is released over a longer period, causing less collateral damage and physical (chiefly melting), chemical and nuclear modification of the crater floor. Cosmic lightning is less disruptive than an impact and it tends to loft the debris into space, leaving a cleanly machined surface.

Some asteroids and moons exhibit huge craters, any one of which should have destroyed the target if it were due to impact. Yet each crater hardly disturbs existing craters. (See the asteroid Mathilde above). Also, lightning always strikes a surface vertically, causing the observed circularity of craters and lack of small craters embedded in steep crater walls. Impacts, on the other hand, may come from any elevation and should create many non-circular craters and holes in walls. But non-circular craters are very rare and often can be seen to comprise a number of near-coincident circular craters. And craters in cliff faces are even scarcer. 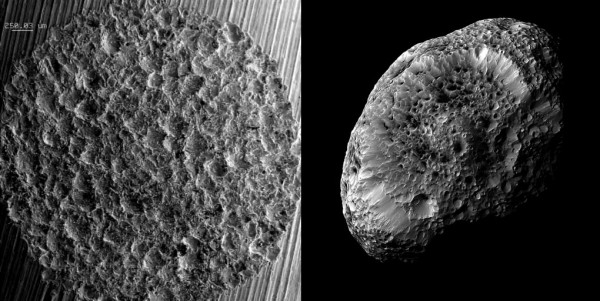 Returning to Hyperion’s strange surface, it shows clear evidence of having been electrically spark machined. It is saturated with circular craters. For comparison, the electron microscope image on the left is of a metal surface that has been subjected briefly to electric spark machining. The floors of the craters on Hyperion are dark for the same reason that comet nuclei are dark and the “calderas” on Io are dark. They have all been electrically etched. The large, roughly circular feature on Hyperion may be the result of a single powerful discharge in which a large but characteristic number of Birkeland current filaments around the axis of the main discharge may excavate small craters to give a scalloped or fluted appearance to the walls of the main crater.

What about the low density calculated for Hyperion? Determinations of the densities of cosmic bodies rely on a purely geometric theory of gravity. The theory cleverly avoids asking the hard question of why inertial mass and gravitational mass is equivalent. But a geometric theory of gravity cannot be the correct answer because it takes no account of the fundamental electrical nature of matter and its interactions. So the deduction that Hyperion’s interior is mostly empty space, based on gravitational perturbation of spacecraft, should be discounted. Hyperion seems solid and is able to sustain sharp relief, including what appears to be the remnant of a very large crater.

Dating of a surface by crater counting is a simplistic and flawed notion. Even the source of the impactors is not clear in that model. So although Hyperion is saturated with craters, the tiny moon can be as young as Saturn’s rings. The intense machining of its surface suggests that it was a fragment that did not coalesce with a newborn planetary “child of Saturn.” Instead, it probably got caught in the electrical exchanges between parent and child and remained in orbit about Saturn.

This dynamic and evolutionary picture of the development of the solar system family of planets has support from some scholars in other disciplines who are deciphering the earliest human memories of a different sky. It is a reconstruction that allowed the only successful and accurate prediction of what would be found beneath Titan’s thick clouds. It shows that Earth, Mars and Saturn are of one family and that Venus was the child. We may find that Hyperion is a dark reddish hue (the redness has been reduced in the NASA image) for the same reason that Mars is a red planet.

Confirmation of this history will have to wait until we have many samples from many bodies in the solar system. Then, by a process similar to DNA matching, we may be able to figure out the genealogies of the planets. But first it will require that we give up our attachment to the familiar children’s fairystory: “Once upon a time, long, long ago there was a solar nebula…”