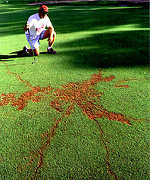 New images from Galileo reveal unexpected details of the Prometheus volcano on Io including a caldera and lava flowing through fields of sulfur dioxide snow.

It appears that the Prometheus volcano on Io has characteristics remarkably similar to those of the Kilauea volcano in Hawaii, although Prometheus is much larger,” said Dr. Laszlo Keszthelyi (KEST-ay), a Galileo research associate at the University of Arizona, Tucson, AZ. “Both volcanoes are long-lived eruptions, with flows that apparently travel through lava tubes and produce plumes when they interact with cooler materials.”

This is a high-resolution image of part of Prometheus, an active volcano on Jupiter’s volcanic moon Io. In earlier, lower resolution images, it appeared that all the dark material at Prometheus comprised a single, long lava flow. The new image shows for the first time that the northeastern end of this dark feature is actually a lava-filled caldera 28 kilometers (17 miles) long and 14 kilometers (9 mile s) wide. The underground source of the Prometheus lava is probably beneath this newly discovered caldera.Galileo scientists are intrigued also by the snowfield containing hummocks, seen to the east of the Prometheus caldera.”

Prometheus is the “Old Faithful” of Io’s many volcanoes. It has been active during every observation over the past 20 years by NASA’s Voyager and Galileo spacecraft and the Hubble Space Telescope. The new spectrometer images show two distinct hot spots at Prometheus — a large one to the west and a fainter,cooler one to the east.The images reveal numerous lava flows near the western hot spot and enable scientists to identify a crater, or caldera, 28 kilometers (17 miles) long and 14 kilometers (9 miles) wide near the hot spot to the east.

The active volcano Prometheus on Jupiter’s moon Io was imaged by the near-infrared mapping spectrometer instrument onboard NASA’s Galileo spacecraft during the close flyby of Io on October 10, 1999. The spectrometer can detect active volcanoes on Io by measuring their heat in the near-infrared wavelengths (just beyond the red end of human vision). It can also obtain information on the composition of materials on Io’s surface using the same wavelengths. The image on the left, taken at an infrared wavelength, shows the different compositions of materials on the volcano. The dark material is thought to be silicate lava, and the white material is sulfur dioxide frost. The image on the right was taken at a longer infrared wavelength that shows heat coming out of the volcano. The hottest areas appear white and the coolest appear black.

Previously, it was thought that the 50 to 100 kilometer- (30 to 60 mile-) tall plume observed at Prometheus formed where the lava erupts onto the surface. Now, however, it appears that the plume forms at the far end of the lava flows. The caldera and eastern hot spot are thought to be associated with the vent where the molten rock rises to the surface. It appears that after the lava reaches the surface, it is transported westward through lava tubes for about 100 kilometers (60 miles) before breaking out onto the surface again. Here, numerous lava flows wander across a plain covered with sulfur dioxide-rich snow. The plume is created by the interaction of the hot lava with the snow.

Comment: It is impossible for hot lava to turn snow into a gas, accelerate the gas to supersonic velocity in tightly collimated jets, and deposit it in a ring. On October 29 the Holoscience News Report made the following statement: “As expected in an ELECTRIC UNIVERSE®, chains of circular craters show that an electric discharge has moved across the surface of Io. Such crater chains are characteristically found on cathode surfaces as the arc jumps from the neat, circular crater it has just burnt to the nearest high point – often the rim of the same crater.” So the jets will form, as we see, preferentially at the edges of the dark, burnt areas in what is known as a “cold cathode” arc. If there were hot lava exposed it would act like the heaters in old radio tubes and start a fixed, “hot cathode” discharge. It is possible, but not necessary, that the kidney-shaped area to the East was the initiator of the discharge as a lava lake. After the lava cools, the arc would wander, creating the fractal pattern of burnt, contiguous pits that extends to the west for more than 100 kilometers. The rounded, scalloped edges to the “lava flow” are characteristic of an arc scar and are seen in abundance on Martian channels.

Knowing the topography would also be a crucial test since it is normal for an arc to run uphill as well as down. Lava follows the lowest levels.

The hummocky snowfield to the East looks very much like a spark-machined surface, created by swarms of minor lightning strikes (that also attend earthly volcanic eruptions) in the higher gas pressures near the main arc, and subsequently covered with snow. Once again, it is similar to the terrain surrounding some of the giant electrical scars on Mars, for example the scarp of Olympus Mons where there is a halo of furrowed and pitted land.

This plume feature is just one of several similarities between Prometheus and Hawaii’s Kilauea. Volcanologists say that Prometheus has been erupting for more than 20 years and Kilauea has been erupting for more than 16 years. The current vent at Kilauea consists of a small lava lake about 100 meters (330 feet) across that produces a relatively small thermal hot spot. From this vent, lava is transported 10 kilometers (6 miles) in lava tubes to the Pacific Ocean where large steam plumes are generated by the interaction between the hot lava and the ocean. Galileo scientists believe the plume seen on the western end of Prometheus is similar to this Hawaiian steam plume, except the Ionian plume is composed largely of sulfur dioxide and rises much higher because of Io’s low atmospheric density and gravity.

Comment: The explanations in terms of a volcano are becoming increasingly strained and ad hoc. The dark surface appears to be pitted with circular craters rather than being a lava flow. Lava tubes are always called upon to explain sinuous features on planetary surfaces where there is no other liquid available to create channels. Many are wider than the Hawaiian lava tube is long and extend for thousands of kilometres at constant width over hill and dale! In the infra-red image there is no heat connection evident between the caldera in the east and the hotspots in the west. This is to be expected if they are electric arcs. It is to be hoped that a closeup nightside image of these small bright arcs becomes available.

The full report is available at http://science.nasa.gov/newhome/headlines/ast05nov99_2.htm