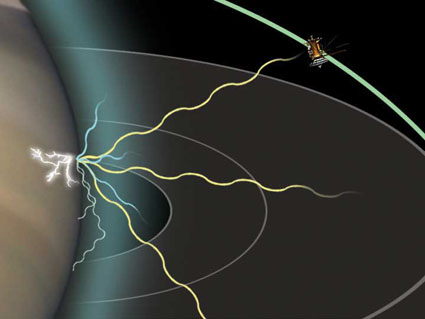 From NASA and PhysOrg.com comes the following report:

Cassini detects Lightning and Radiation at Saturn and Titan’s Glow

The spacecraft’s radio and plasma wave science instrument detected radio waves generated by lightning. “We are detecting the same crackle and pop one hears when listening to an AM radio broadcast during a thunderstorm,” said Dr. Bill Kurth, deputy principal investigator on the radio and plasma wave instrument, University of Iowa, Iowa City. “These storms are dramatically different than those observed 20 years ago.”

Cassini finds radio bursts from this lightning are highly episodic. There are large variations in the occurrence of lightning from day to day, sometimes with little or no lightning, suggesting a number of different, possibly short-lived storms at middle to high latitudes. Voyager observed lightning from an extended storm system at low latitudes, which lasted for months and appeared highly regular from one day to the next.

Comment: This observation fits the electrical model outlined on June 19 in Cassini’s Homecoming where I wrote:

“Saturn’s rings form part of the circuit that feeds energy into its plasma donut, where it is stored before discharging into Saturn’s ionosphere and generating X-rays. The Sun has a similar plasma donut that discharges to the Sun, causing sunspots and solar flares. We might then expect Saturn’s storms to show similar behavior to sunspots, which are the Sun’s electrical ‘storms.’”

In other words, short-lived storms at higher latitudes at solar minimum and extended storms at low latitudes during solar maximum.

Furthermore, in a NASA news report of July 1 we are told,

“‘During approach to Saturn, Cassini was greeted at the gate,’ said Dr. Bill Kurth, deputy principal investigator for the radio and plasma wave science instrument onboard Cassini. ‘The bow shock where the solar wind piles into the planet’s magnetosphere was encountered earlier than expected. It was as if Saturn’s county line had been redrawn, and that was a surprise.’ Cassini first crossed the bow shock about 3 million kilometers (1.9 million miles) from Saturn, which is about 50 percent farther from the planet than had been detected by the Pioneer, Voyager 1 and Voyager 2 spacecraft that flew past Saturn in 1979, 1980 and 1981.”

Instead of treating Saturn’s magnetosphere conventionally like an inert cosmic windsock flapping in the solar wind, the electric model views a magnetosphere as a Langmuir plasma sheath that expands and contracts in response to the electric stress imposed on the planet inside it. Saturn, now at solar minimum, is under less electrical stress than when the Voyager spacecraft whizzed by. That explains why the Saturnian magnetosphere is 50 percent larger and why lightning has shifted to higher latitudes and reduced in intensity. The Physics.org report continues:

The difference in storm characteristics may be related to very different shadowing conditions in the 1980s than are found now. During the Voyager time period when lightning was first observed, the rings cast a very deep shadow near Saturn’s equator. As a result, the atmosphere in a narrow band was permanently in shadow — making it cold — and located right next to the hottest area in Saturn’s atmosphere. Turbulence between the hot and cold regions could have led to long-lived storms. However, during Cassini’s approach and entry into Saturn’s orbit, it is summer in the southern hemisphere and the ring shadow is distributed widely over a large portion of the northern hemisphere, so the hottest and coldest regions are far apart.

Comment: Lightning has little to do with solar heating. Remember that Saturn is about ten times further from the Sun than the Earth. Solar heating is one hundred times less effective at that distance. That has made the high-speed equatorial winds on Saturn, which have dropped in speed since the Voyager encounters from 1,700 km/hr to 1,000 km/hr, very difficult to explain. The ring shadow explanation must be viewed in this context. Solar heating is totally inadequate to explain weather phenomena on Saturn. The Saturnian lightning and equatorial winds are directly linked to the electrical energy input to Saturn and not to solar heating. Changes in both are therefore related to the solar electrical energy cycle, as reflected by sunspots. This leads us to another discovery that was a surprise for the conventional model of magnetospheres and trapped radiation belts:

A major finding of the magnetospheric imaging instrument is the discovery of a new radiation belt just above Saturn’s cloud tops, up to the inner edge of the D-ring. This is the first time that a new Saturnian radiation belt has been discovered with remote sensing.

>>The magnetospheric imaging instrument onboard Cassini recently discovered a new radiation belt just above Saturn’s cloud tops, up to the inner edge of the D-ring. Before this discovery, it was not anticipated that such a trapped ion population could be sustained inside the rings. Image Credit: NASA/JPL/APL

This new radiation belt extends around the planet. It was detected by the emission of fast neutral atoms created as its magnetically trapped ions interact with gas clouds located planetward of the D-ring, the innermost of Saturn’s rings. With this discovery, the radiation belts are shown to extend far closer to the planet than previously known.

“This new radiation belt had eluded detection by any of the spacecraft that previously visited Saturn. With its discovery we have seen something that we did not expect, that radiation belt particles can ‘hop’ over obstructions like Saturn’s rings, without being absorbed by the rings in the process,” said Dr. Donald G. Mitchell, instrument scientist for the magnetospheric imaging instrument at the Johns Hopkins University Applied Physics Laboratory, Laurel, Md.

Comment: As I wrote on June 19, “The test will be to see how predictive it [the electrical model of Saturn] turns out to be.” And “Saturn’s rings form part of the circuit that feeds energy into its plasma donut, where it is stored before discharging into Saturn’s ionosphere and generating X-rays.” Score one for the electrical model. It predicted this finding of an inner radiation belt. However, the term “radiation belt” is misleading. The belt is a donut-shaped “plasmoid,” which stores electromagnetic energy in the form of circulating high-energy charged particles. Radiation belt particles do not need to “hop” over Saturn’s rings to magically appear above the cloud tops. An electric current drifts radially inward across the rings. At solar maximum, when the Voyager spacecraft sailed past, that radial current took the form of discharges across the rings – forming the enigmatic “spokes.” As shown in laboratory experiments, the inflowing electric current forms a plasma donut where the electrical energy is stored. It is that energy that drives the winds and lightning on Saturn. Meanwhile Saturn’s giant moon, Titan, orbits in Saturn’s electrical environment. The report continues:

“Not only is Titan putting on a great light show but it is also teaching us more about its dense atmosphere,” said Dr. Kevin Baines, science team member for the visual and infrared mapping spectrometer at JPL. “What is amazing is that the size of this glow or emission of gases is a sixth the diameter of the planet.”

The Sun-illuminated fluorescent glow of methane throughout Titan’s upper atmosphere – revealing the atmosphere’s immense thickness and extending more than 700 kilometers (435 miles) above the surface, was expected. However, the night time glow, persistently shining over the night side of Titan, initially surprised scientists.

“These images are as if you were seeing Titan through alien eyes. Titan glows throughout the near-infrared spectrum. If you were an alien it would be hard to get a good night’s sleep on Titan because the light would always be on,” said Baines.

Comment: Another surprise for the electrically sterile picture of the solar system! On June 19 I wrote, “Titan’s electrical plasma interactions may be like those of Venus.” I based this view on evidence presented in that news item that Titan and Venus had the same recent origin and that Titan may have received some of Venus’ primordial atmosphere. Now that we have discovered that the entire moon is bathed in infrared light, we can turn to Venus for some insights.

Venus actually glows in the visible spectrum on the night side of the planet. Peter Cattermole writes in his book, VENUS:

“Schröter also observed the “ashen light”, a faint luminosity observed on the night side of the planet, inside the crescent. This effect has been seen by many hundreds of observers since and there can be little doubt as to its authenticity. Explaining exactly what it is, however, is more difficult. In the light of what we now know about Venus, there is every likelihood that the effect is in response to electrical effects in Venus’s atmosphere, that is, to aurorae. Early support for this idea came from spectrograms of the night side of the planet obtained in 1955 by N. Kozyrev at the Crimean Astrophysical Observatory. Kozyrev reported spectral bands due to ionized nitrogen at wavelengths of 3914 and 4278 Angstroms – exactly what is observed during terrestrial airglow. Three years later, Newkirk, at the High Altitude Observatory in Colorado, obtained further spectrograms of the night side of Venus, which went some way to corroborating the earlier results.”

The associated puzzle as to why Venus maintains a night side ionosphere, given that night lasts 58 Earth days, has not been answered. It is known that fast electrons bombard the night side atmosphere and there is an unexplained large, fast drift of plasma (up to 10 km/sec or 23,000 mph) from day to night hemispheres. The night sky of Venus is lit electrically.

It will be interesting to see if carbon monoxide is also present in Titan’s lower atmosphere in more than the trace amounts measured in the upper atmosphere. The nebular hypothesis requires that nitrogen and carbon monoxide are swept from the sub-nebula of the giant planets before their moons were formed and after those molecules have reacted with solar hydrogen to form ammonia and methane. Such a specific and ad hoc requirement of the nebular hypothesis seems very unlikely to be met. As the leading planetary scientist Dr. S. Ross Taylor notes, “There is a general problem accounting for the high abundance of methane and for the presence of nitrogen in Titan.”

But as I wrote on June 19, “…we may expect to find that the Titan atmosphere has some of the smell of Venus about it.” This was based on a forensic approach to the history of the solar system, which identified the birth of Venus from the giant Saturn in recent prehistory. Support for this seemingly outrageous claim now comes from experimental high-energy plasma physics. To continue, “On the Venusian surface, nitrogen molecules are converted to carbon monoxide molecules by a catalytic nuclear reaction in the presence of red-hot iron. …The carbon monoxide reacts at the hot surface of Venus with water vapor to form carbon dioxide and hydrogen. It is a well-known industrial process.”

Now, Titan does not have the surface conditions to convert carbon monoxide to carbon dioxide so the dominance of nitrogen and the presence of carbon monoxide in its atmosphere may be explained as a whiff of the newborn Venusian atmosphere when nitrogen was more abundant. Carbon monoxide and hydrogen would also react at the hot Venusian surface to form hydrocarbons, including methane and ethane. They would be another expected contribution to Titan from Venus, or from the parent, Saturn.

So far, so good for the ELECTRIC UNIVERSE® model. But just how many surprises does it take for the conventional model of the solar system to be discredited? It seems, to paraphrase Carl Sagan: