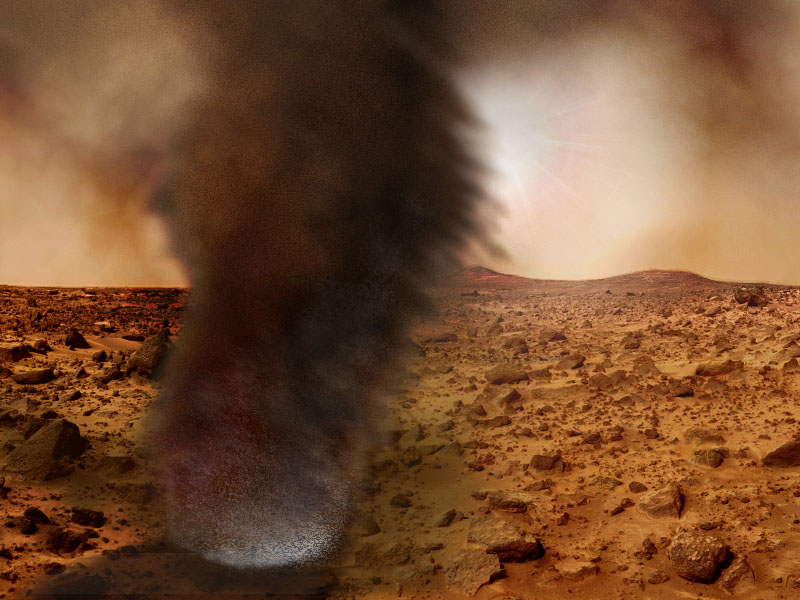 ‘.. it may sometimes be that not to know one thing that is wrong could be more important than knowing a hundred things that are right.’
– Halton Arp, Quasars, Redshifts & Controversies

The electrical character of dust devils and tornadoes is rarely mentioned. In fact, researchers only recently began to examine the electrical nature of dust devils in an effort to understand what is happening on Mars. Mysteries still surround electrical activity in our atmosphere. For example, the Earth has a vertical electric field, in the order of 100 volts per meter in dry air, whose origin is unknown. And scientists do not know what causes the most obvious electrical phenomenon in the atmosphere –’ lightning. See ‘The Balloon goes up over lightning!‘ for a discussion of the ELECTRIC UNIVERSE® model of lightning.

However, last week saw another success for the ELECTRIC UNIVERSE® model. It’s now official that dust devils on Earth exhibit strong electric fields, in excess of 4,000 volts per meter. They generate magnetic fields as well. The researchers who made the discovery added the qualification ‘”on Earth”‘ because the discovery was a surprise. They cannot be certain that it applies to the dust devils on Mars because their purely mechanical model did not predict the electrical effects found in earthly dust devils. However the tentative connection was made and resulted in the following artist”s impression of what an electrified Martian dust devil might look like.

‘The 5 mile high dust devils on Mars and the global Martian dust storms are, I believe, a manifestation of electric discharges on Mars. In the very low atmospheric pressure lightning would be more like a diffuse auroral glow. The problem of generating dust storms on Mars is how to get the particles on the surface to “saltate”, or leave the surface, with such little force in the wind. Electrostatic forces could easily do the job.’

Several years ago, the electrical nature of dust devils and tornadoes was suggested on this website in the ELECTRIC UNIVERSE® Synopsis. And a fuller explanation of the electromagnetic effects of a tornadic electric discharge was presented in Sunspot Mysteries. There I wrote:

‘Make no mistake, the Martian dust devils are tornadoes that dwarf their earthly counterpart. It shows that clouds are not required to generate them. They are an atmospheric electric discharge phenomenon.’

‘Dust devils are common on Mars, and NASA is interested in them as well as other phenomena as a possible nuisance or hazard to future human explorers.’ ‘If martian dust devils are highly electrified, as our research suggests, they might give rise to increased discharging or arcing in the low-pressure martian atmosphere, increased dust adhesion to space suits and equipment, and interference with radio communications.’ Farrell is the lead author of the paper about this research published in the Journal of Geophysical Research.

‘Two ingredients, present on both Earth and Mars, are necessary for a dust devil to form: rising air and a source of rotation,” said Dr. Nilton Renno of the University of Michigan, Ann Arbor, Mich., a member of the research team and expert in the fluid dynamics of dust devils. “Wind shear, such as a change in wind direction and speed with altitude, is the source for rotation. Stronger updrafts have the potential to produce stronger dust devils, and larger wind shear produces larger dust devils,” Renno said.

Comment: In the words of Halton Arp, ‘not to know one thing that is wrong could be more important than knowing a hundred things that are right.’ In this case it is the confusion of cause and effect. It is simply assumed that the Earth and its environment in space is electrically neutral. Therefore some energy is required to cause charge to separate and produce the strong electric field in the dust devil. The only energy available is solar radiation and the movement of air (fluid dynamics). However, in an electrified universe charge is already separated on the macroscopic scale and the movement of air in a dust devil is an effect of charge recombination, not a cause of charge separation.

Dust particles become electrified in dust devils, when they rub against each other as they are carried by the winds, transferring positive and negative electric charge the same way you build up static electricity if you shuffle across a carpet. Scientists thought there would not be a high-voltage, large-scale electric field in dust devils, because negatively charged particles would be evenly mixed with positively charged particles, so the overall electric charge in the dust devil would be in balance.

Comment: It is clear from laboratory experiments that different size dust grains can charge to opposite polarities upon collision. However, the electric force between oppositely charged grains would tend to prevent their separation. That is what scientists expected and it explains their surprise when the opposite was found. But it may not be so surprising if we stop treating a dust devil as a fluid dynamics problem and consider it instead as weakly ionized plasma subject to the Earth”s vertical clear-air electric field. In such circumstances the electric field may be strongest (and the electric field reversed) at the base of the dust devil due to the formation of a plasma ‘double layer’ or ‘virtual cathode.’

Comment: The earth and all other bodies in the universe are not isolated and electrically inert. They are intimately connected to and influenced by the ELECTRIC UNIVERSE®. This means that dust devils are not a local event, but are driven like motors by a cosmic current. Dust devils and storm clouds do not act as ‘batteries’ or ‘dynamos’ to provide power to a global atmospheric circuit. As for the magnetic effects of a tornado or dust devil, they will be very strong because the charges are moving at meters per second instead of centimeters per hour, as happens in a current-carrying wire.

If martian dust grains have a variety of sizes and compositions, dust devils on Mars should become electrified the same way as their particles rub against each other, according to the team. Martian dust storms, which can cover the entire planet, are also expected to be strong generators of electric fields. The team hopes to measure a large dust storm on Earth and have instruments to detect atmospheric electric and magnetic fields on future Mars landers.

Comment: In the electrical model of the solar system, all planets must contrive to supply electrons to the positively charged Sun. Mercury probably does it in a similar way to our Moon, through photoelectric and cold-cathode emission. Occasionally the emission may be strong enough at certain ‘hot spots’ to cause the anomalous glows seen on the Moon. The next planet from the Sun, Venus, has an ionosphere entwined in current ‘ropes’ from the solar wind. It causes powerful ‘super bolts’ of lightning to fly between the planet’s ionosphere and the surface. It seems the electric field at Venus’ hot surface is so strong that above a certain altitude the atmosphere hugging the surface glows with a surface discharge known as St. Elmo’s fire. Being dense plasma it reflected the radar signal from the Magellan Orbiter as if the mountains of Venus were plated with metal, much to the puzzlement of planetary scientists.

On Earth we have water clouds to charge up between the ionosphere and the Earth and spare us the super bolts of Venus. Although there are rare reports of ‘bolts from the blue,’ the Earth contrives to discharge in two stages, by lightning from ground to cloud and by glowing jets from the cloud to the ionosphere. The latter stage has only recently been recognized and the flashes given whimsical names like ‘sprites,’ ‘elves’ and ‘gnomes,’ which probably reflects the scientists’ disbelief before they were finally acknowledged. On rare occasions, a powerful lightning bolt strikes directly from the cloud tops to Earth. Such super bolts rip electrons violently from the earth and may form small-scale furrows like those seen on all other solid bodies in the solar system.

Usually the cloud to ground discharge takes the form of the multiple sparks we call lightning. However, in some parts of the world the lightning switches to the slower discharge of the tornado. Then, instead of the electric charge rushing directly between the ground and the cloud along a thin lightning channel, it is constrained by powerful electromagnetic forces to rotate in a long, thin cylinder or vortex. Measurement of the magnetic field and earth current near touchdown of a tornado shows that it is electrically equivalent to several hundred storm cells. It is this concentrated electrical power in the central vortex that creates damage far in excess of that possible for a simple wind vortex. It also explains the burnt surfaces and objects sometimes found after the passage of a tornado.

The thin dry atmosphere of Mars and the large temperature gradient near the surface is certainly conducive to the formation of dust devils. However, like the other planets, Mars has to supply electrons to the solar discharge. The high electron density above Mars was remarked upon when the first orbiting spacecraft arrived there. Images from Mars landers of a dust laden pink sky were also a surprise. Scientists expected a deep blue-black sky because the atmosphere is about a hundred times thinner than ours and less able to hold dust suspended. In the thin, practically cloudless air of Mars, the dust devils provide the best means of moving electrons from the surface toward the Martian ionosphere. The dust particles, becoming charged, would be suspended in Mars atmospheric electric field to give the pink sky. In other words, Martian dust devils are more akin to tornadoes. Towering up to 8 kilometers into the sky their destructive capability at the surface would be far more powerful than that of a simple spinning wind in Mars” thin air.

When these Martian tornadoes pass over the surface of Mars, they often leave dark, criss-crossing streaks on the land. It is simply assumed that the wind removes bright dust from the terrain, revealing a darker surface underneath. It is possible however, that electrical damage to the surface, and therefore erosion, is being caused by the Martian tornadoes. They certainly pose a much greater risk to landing craft and future visiting astronauts than scientists expect.

Meanwhile there is another example of an electrically damaged body whose surface patterns bear a strong resemblance to those formed by the electric tornadoes on Mars. It is Jupiter’s moon, Europa. 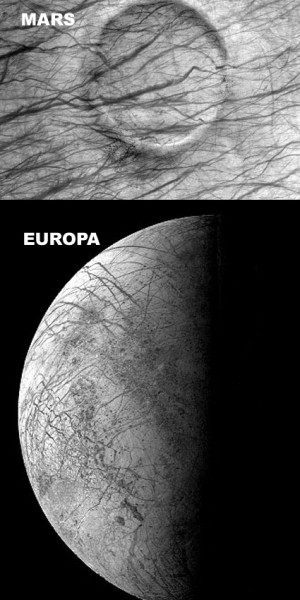 Traveling discharges created giant furrows on Europa reflecting the great strength of those wandering arcs compared to the diffuse discharges on Mars today. The furrows on Europa are not cracks in the ice. They are instead a frozen record of the catastrophic power of Jupiter’s thunderbolt, when unleashed by that electrical powerhouse of a planet.

The ELECTRIC UNIVERSE® model provides a unifying concept for understanding the solar system by simply accepting the overwhelming evidence for the primary role of electricity and the electric force in the mechanism of the cosmos. Future historians will find the science of the 20th century extraordinary for its insistence on a cosmology based on pre-industrial-revolution thinking. Electricity was a mystery then and remains so into the 21st century for astronomers and geologists. Once again, to not know this simple fact is more important than all things they do know.