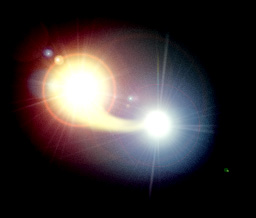 In my May news item[1] I wrote, “It is far simpler and infinitely more efficient if planets are “born” at intervals by the electrical ejection of charged material from the similarly charged interiors of larger bodies – gas giants from stars, and rocky planets from gas giants.”

The following report[2] is from Astronomy.com of July 23 and provides further evidence in favor of such a model:

Stars with high metal content are most likely to harbor planets.
by Vanessa Thomas

When looking for planets beyond our solar system, astronomers often target stars like the sun. But they may want to refocus their attention on stars that hold more metals than our own. A new study reveals that the more metal-rich a star is, the better the chance it hosts a planet.

Extrasolar-planet hunter Debra Fischer of the University of California, Berkeley, and astronomer Jeff Valenti of the Space Telescope Science Institute analyzed the composition of 754 nearby stars and looked to see which stars had planets. They found a strong, nearly linear correlation between a star’s metal content and the likelihood that it has a planet.

“We now know that stars which are abundant in heavy metals are five times more likely to harbor orbiting planets than are stars deficient in metals,” says Fischer, who presented the results Monday at the International Astronomical Union meeting in Sydney, Australia. “If you look at the metal-rich stars, twenty percent have planets. That’s stunning.”

Fischer and Valenti examined the abundances of iron, nickel, titanium, silicon, and sodium in the spectra of more than 1,000 stars. (In astronomy, all elements heavier than helium are considered “metals.”) Of these, 754 were monitored for at least two years, so the astronomers could tell whether the stars had any close-orbiting gas giant planets. (A large, orbiting planet exerts a gravitational force on a star, causing a “wobble” that’s detectable in the star’s spectrum.) Planets orbit 61 of the studied stars while the other 693 have no known planets.

After grouping the stars by metal content, the pair compared how many stars of each type had planets. Stars with sun-like metal abundances have a 5 to 10 percent chance of having planets. Those with three times more metals than the sun have a 20 percent chance. Metal-poor stars with only one-third as much as the sun have just a 3 percent probability. None of the 29 most metal-deficient stars of the study had planets.

“These data suggest that there is a threshold metallicity, and thus not all stars in our galaxy have the same chance of forming planetary systems,” Fischer says. “Whether a star has planetary companions or not is a condition of its birth. Those with a larger initial allotment of metals have an advantage over those without.”

The findings also suggest that younger stars are more likely to have planets. That’s because stars born in the galaxy’s early days formed from nebulae that included fewer heavy elements. As time passed, more stars exploded as supernova and heavier elements fused in their cores were scattered into the interstellar medium.

“Stars forming today are much more likely to have planets than early generations of stars,” comments Valenti. “It’s a planetary baby boom.”

Comment: Given the orthodox notion of how planets form, it is not clear why we should expect more gas giant planets about a star simply because it has more heavy elements in its spectrum.

However, I argued in my earlier news item that stars “give birth” from time to time by electrical parturition. It occurs in a nova-type discharge from their charged interior. Unlike the hydrogen-bomb model of stars, there is no internal heating. Intense plasma discharges at the stellar surface give rise to starshine. Those discharges synthesize “metals” that continually rain into the star’s depths. The heavy element abundance in a star’s spectrum is not just an inheritance from old supernovae. Stellar interiors become enriched in heavy elements. The star “children” are gas giants or binary partners formed from those heavier elements after expulsion from the star.

Therefore we should simply expect from the electric star model that the longer a star has been shining the more heavy elements it will show in its spectrum and the more time it has had to “give birth.” So stars forming today are not more likely to have planets than earlier generations. They probably have not had time to have planetary “children.” Whether a star has planetary companions or not is NOT a condition of its birth. We should expect that below a certain metallicity (that is, age) a star will not have planets. We do not expect babies to give birth! Planet formation has more to do with the growth of internal electrical stress in a star. It can be enhanced by episodes of unusual electric stress in its environment. We should be looking closely at stars that have undergone nova outbursts.

It should be noted that plasma cosmologists have a view of star formation that allows for a number of condensed bodies to be formed in close proximity at the same time. And the separation of elements by their “critical ionization velocity” in a plasma pinch may offer an alternative explanation for differences in metallicity between the bodies. However, it is not clear to what extent this mechanism plays a role in the development of planets about a star. Certainly, it does not explain the propensity for planets to be found in higher numbers near stars of higher metallicity.

The stellar parturition model seems to offer a simple solution to:

a) the presence of heavy elements in gas giants,
b) a greater number of gas giants being found around stars of high metallicity, and
c) the propensity for close orbits of the gas giants about their parent star.